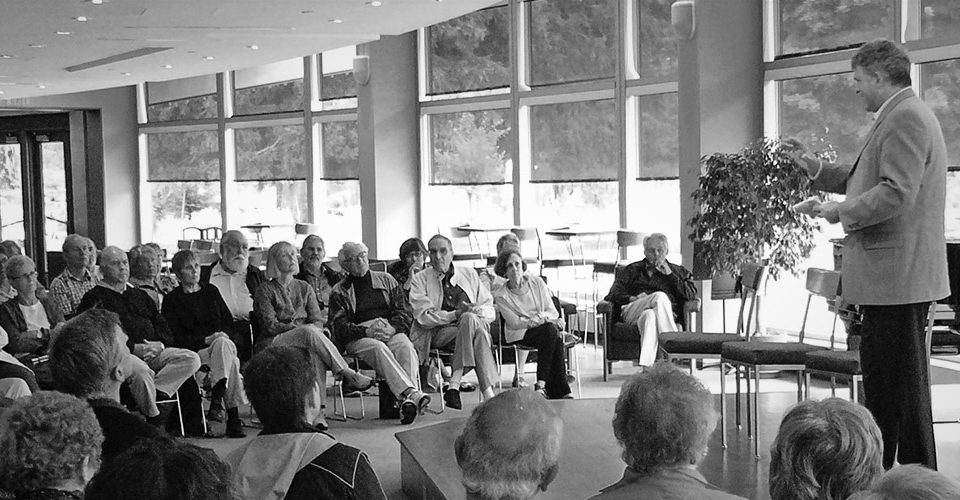 Peer into the Playbill

Peer into the Playbill

10 – 11:30 a.m.  unless otherwise stated| Lazaridis Hall
A panel of special guests discusses ideas and issues in the playbill. From $25

RICHARD III: DISCOVERED AND UNCOVERED, July 7
After Richard III’s remains were discovered and exhumed from beneath a parking lot in Leicester, England, curiosity peaked. Sheilah O’Connor and Susan Troxell, members of the Richard III Society, are joined by scholar Randall Martin from the University of New Brunswick and Artistic Director Antoni Cimolino to discuss the enigmatic king and the various influences Shakespeare combined to create one of his most memorable characters.

SEEING UNSEEN, July 21
Shakespeare weaves the problems with the perception of truth into his iconic story of Hamlet. In today’s society, privacy is hard to come by. David Lyons, from the Surveillance Studies Centre at Queens University, gathers with other experts to discuss espionage and surveillance in Shakespeare’s world and compare it to the data mining of today.

YOUNG MEN IN CRISIS, July 28
What would Hamlet and Bertram have to say about their counterparts today? This conversation with Dr. Paul Yachnin of McGill University, Dr. Kwame Mckenzie, Co-Director of the Division of Equity, Gender and Population in the Department of Psychiatry at the University of Toronto, and child and adolescent psychiatrist Dr. John Teshima examines how outdated frameworks of masculinity continue to haunt young men today.

SHAKESPEAREAN . . . COMEDY?, August 4
All’s Well That Ends Well is classified as one of Shakespeare’s late comedies – but can the definition of “comedy” be questioned within the context of the play? Learn from director Scott Wentworth and other experts what defined a comedy in Shakespeare’s day, and how it translates to our own time.

BEYOND MONOGAMY, August 11
Welcome to Non-Monogamy 101! In this informative discussion, Every Little Nookie playwright Sunny Drake is joined by Janet Hardy, coauthor of the groundbreaking work The Ethical Slut, and journalist and author Jenny Yuen (Polyamorous: Living and Loving More), for a frank discussion about the ins and outs of non-monogamy.

THE CRIMINAL ELEMENT, August 18
From crime dramas to investigative journalism, what is it about characters like Chicago’s Roxie and Velma that continues to fascinate audiences? Join psychiatrist Dr. Mark Rapoport and forensic psychiatrist Dr. Lisa Ramshaw and others as they examine our fascination with criminals, crime, and the catharsis they provide.

YORUBA BELIEF AND COSMOLOGY, August 25
In an informative panel discussion, dramaturge Mūkonzi Mūsyoki leads a panel of cultural experts in a discussion of the Yoruba religion and belief system represented in Death and the King’s Horseman.

SHAKESPEAREAN WIDOWS, September 1
Lusty widows, wise widows, angry widows. In Hamlet, All’s Well That Ends Well, and Richard III, Shakespeare uses and goes beyond the stock character of the widow, revealing their potential for agency beyond that of other women of the time. Veteran company member Seana McKenna, with Thomas Luxon (Dartmouth College) and others, discuss what it’s like to play these characters, and how Shakespeare’s contemporaries understood these women’s unique positions in Early Modern England.

CONTEXTUALIZING COLONIAL PLAYS, September 8
Death and the King’s Horseman is set in Nigeria during the 1940s, a time when the British Empire was beginning to lose direct control of its colonized lands. What does it mean to perform this play in Canada, a country with its own history of colonization? Join dramaturge Wolé Oguntokun and others as we examine what it means for Soyinka’s masterpiece to be produced in today’s world.

LINE OF QUEENS: DNA AND RICHARD III, September 15
The royal line of Richard III may have died with him on the battlefield, but a succession of female relatives has carried his DNA down to the present day. In this panel conversation, we will discover how Professor Turi King – leader of the team sequencing Richard III’s genes – and other scientists and archaeologists were able to identify the last Yorkist king thanks to genealogy and genetics.

STORIES FROM THE GRANDMOTHERS, September 17, 5:30pm-7:00pm
Join us to hear the stories of four incredible Indigenous women: Minni Akrapook, Shirley Horn, Edna Manitowabi, and Pauline Shirt. Through their vision, these activists, knowledge-keepers, wisdom-keepers, mentors, and Elders have been instrumental in revitalizing traditional teachings, advocating for the health of Indigenous communities, and leading us all towards healing. An event filled with laughter and truths.

HOW TO FILM A PLAY, September 22
What began in 2014 as a dream of capturing the entire Shakespeare canon on film has now grown into a worldwide success, with the Stratford Festival’s productions broadcast globally through STRATFEST@HOME. Join producer and director Barry Avrich, Stratford Festival Artistic Director Antoni Cimolino, and others as they share the difficulties and creative solutions needed to capture the ephemeral magic of theatre on film.

MISERS, MONEY, AND MORTALITY, September 29
For Harper in The Miser, money equals life: he hoards every dollar, believing his fortune will award him immortality. Mark Kingwell, professor of philosophy at the University of Toronto, psychologist Dr. Peggy Richter, and personal finance expert Rubina Ahmed-Haq consider the human impulses to hoard, to fear death, and to love money.

WOMEN-BUILT WORLDS, October 6
Louisa May Alcott’s famous novel Little Women puts the desires of four young women at its centre, portraying their strength and resilience. What happens when girls and
young people are placed at the centre of storytelling? Join Young Adult writer R. J. Anderson and other experts as they discuss how to build worlds and characters that speak to young people.